The Montorsi Method, as an alternative to the traditional orthodontic therapy, is based on the use of a very simple myofunctional orthopedic device that does not act only on the teeth but on the entire cranio-occlusal complex. It is a viscoelastic harmonizer whose evolution, called ACOM® (Cranio Occlusal Armonizer Montorsi), was conceived and studied by Dr. Adriano Montorsi.

The results of this therapy are surprising. In a very short time you can already appreciate changes inside the mouth, the skull, the face and even on the emotional level, as in the case of  Francesca A. a lively baby with occlusal problems to which the dentist wanted to approach with an expander of the palate . Not convinced of this solution, the parents decided to follow the Montorsi Method and after a few months they could appreciate changes on an occlusal, facial, but especially emotional level. In fact, the child was much calmer, serene and even studied with more pleasure. 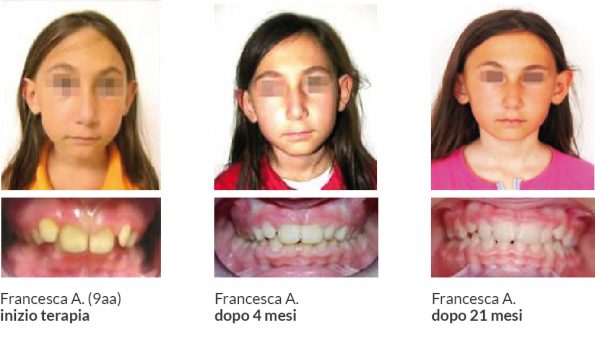 The beneficial effects of the Montorsi Method are not limited only to the cranial occlusal and emotional sphere, but they also extend positively on the posture and this is particularly important in adults, besides the amazing results also the remission of the symptoms due to the postural imbalance.

The intrinsic ability to establish a new relationship with the system is activated by changing the arrangement of the teeth and the jaw with the simple action of biting an ACOM®. So we have a neuro-sensorial approach that puts back in motion what was blocked, from a dentition of necessity (unconscious) to one of freedom whose proprioceptive sensation will be quite different as well as the arrangement that the muscles will give to the skull, to the jaw and to the posture, obtaining a variation of the sensory experience felt without external manipulations.

The concept that man adapts to therapy, prerogative of orthodontic therapy, is inverted by the Montorsi Method where it is the therapy that will adapt to the patient. So while with orthodontic therapy  you want to pursue only an aesthetic result often inducing a functional injury, with the Montorsi Method we are looking for balanced occlusion that is the best assurance for not having relapses. In fact, cranio-occlusal harmonization is spontaneously induced by the brain with a balancing of force vectors which are the enhancement one.